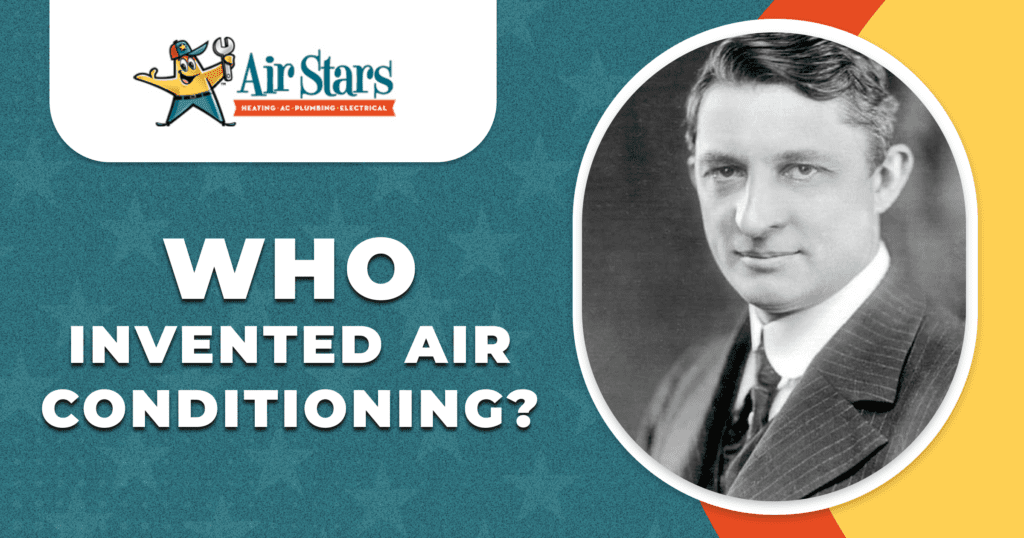 Even here in the Willamette Valley, most people rely on air conditioning for much of the year. Most people don’t think about the origins of AC, just that it helps keep them cool. It wasn’t widely used in homes until the 1970s despite having been invented decades earlier. Those who could afford it had home air conditioning by the ‘40s and ‘50s. But here, we’ll delve into the invention of modern AC in the early 1900s and who invented air conditioning.

For thousands of years, primitive forms of air conditioning existed. Buildings in Ancient Egypt used passive air-conditioning techniques in their construction. In Ancient Rome, snow and ice from the mountains would be transported into the city. Roman Emperor Elagabalus used these along with primitive fans or waving palm leaves to create a cool breeze.

Benjamin Franklin experimented with the concept of air conditioning in 1758. In experiments with John Hadley, alcohol and similar liquids were selected for their ability to evaporate quickly. This yielded the potential to cool down objects, so much so that water could freeze. But this wasn’t ideal for addressing extreme temperatures.

In the 1840s, physician Dr. John Gorrie, of Florida, expanded the idea of artificial cooling. He even invented a machine that could create ice, although didn’t solve the dilemma of how to transport ice.

The Invention of Modern Air Conditioning

Willis Carrier is regarded as the inventor of the air conditioner. Born in 1876, he attended Cornell University and, in 1901, graduated with a Master of Engineering degree. What became the world’s first modern air conditioning system was invented in 1902. It was intended to prevent paper from wrinkling and to improve image quality for magazines printed by Sackett-Wilhelms Lithographing & Publishing Company in Brooklyn, NY.

Carrier’s invention included humidity control. Like traditional ACs, it blew air over coils to provide a steady flow of cool air. He then took on an experimental engineering role and, along with Irvine Lyle, founded the Carrier Air Conditioning Company of America in 1908, realizing the same concept could be used in other printing plants. It became the Carrier Corporation in 1930.

In 1906, Carrier was granted a patent for a spray-type air conditioning system that could humidify or dehumidify the air, and another patent in 1907 for an automatic control system that allowed for constant relative humidity. The company installed its first residential air conditioner in 1913. However, it was too large and too noisy, not to mention filled with chemicals nobody wanted in their homes.

However, it was his system for movie theatres that took off (it cost $10,000 to $50,000 at the time). For several decades, air conditioning was out of reach except for the most luxurious properties and hotels.

From Inventor and Businessman to Industry Leader

Carrier’s solution for a printing company was a catalyst for an enduring legacy. In addition to The Carrier Corporation, which became a subsidiary of United Technologies Corporation in 1980 (and again became an independent publicly traded company in 2020), he also started Toyo Carrier and Samsung Applications in Japan and Korea in 1930. The Carrier Corporation continues to be a world leader in residential and commercial HVAC and refrigeration technologies and products.

It wasn’t long before the technology became more compact to accommodate more applications. In the 1920s, inventors H.H. Schultz and J.Q. Sherman marketed a “room cooler”, or a type of window AC unit to cool an individual room. Soon, an air conditioner for cars was invented, although it took up the entire trunk space. Millions of homes had AC by the 1960s, but the technology was still too costly for most.

Not until the late 1950s, did office managers realize that a cooled office helped workers be more productive. Today, air conditioning is present in about 90% of U.S. homes.1 All the while, manufacturers continue to work on making ACs more efficient and environmentally friendly. From home comfort to office productivity, to education, preserving historical artifacts, mining, and operating large telescopes, aircraft, and space vehicles, it’s hard to imagine a world without air conditioning.

Now, we’ll shift from the question “Who invented air conditioning?” to “Why choose Air Stars?” We specialize in high-quality AC, furnace, and heat pump installation, repair, and maintenance as well as provide electrical and plumbing services in the Willamette Valley. Extended warranties, payment plans, and a 100% satisfaction guarantee are available to all our customers. Our technicians are licensed and trained. They arrive on time, in fully stocked vans, to get the job done in one visit, while we always stick to our quoted price. To get started, book online or call 503-483-8616 today.

Air Stars Guide: How to Clean a Garbage Disposal

A garbage disposal is a convenient appliance and helps keep your kitchen clean. But the unit itself must be cleaned from time to time. Otherwise, it can get clogged and…... Read Article

To schedule an appointment or ask us a question, simply fill out our easy-to-use contact form today!

We’ve said goodbye to our old name—Clean Energy Comfort—and rebranded! The good news is we haven’t said goodbye to any of the things you love about us. We’re still the same team you can trust—only better!